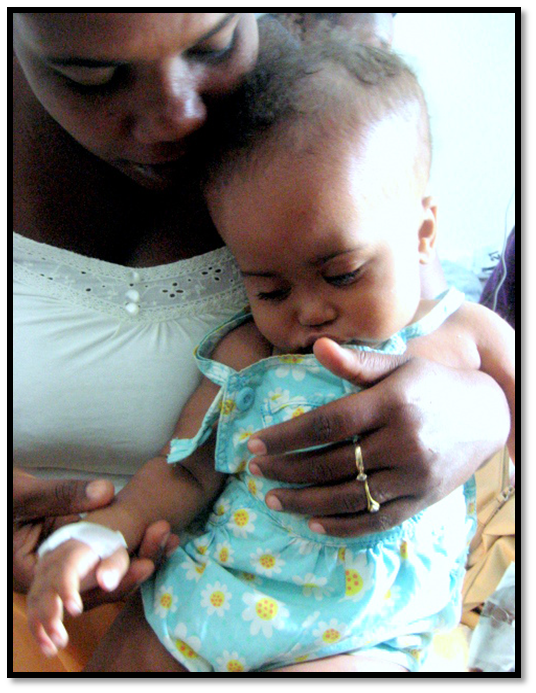 was brought by her parents to HBMPM on May 11th, 2012.  Maguy Rochelin, RN saw them sitting in the waiting area and asked where they were from. (It is easy to identify the children who come to see the Neurosurgery team:   the children have big heads.) The parents told Maguy that they had traveled from Fond du Blanc. They had come two and a half hours by bus because they were told that they could get help at this hospital. They had not called ahead. They did not know that the team had arrived the day before and were operating that day and the next. The team evaluated the baby, measured her head and walked her right over to the CT scanner. Dr John Ragheb, the neurosurgeon from Miami, was able to look at the child and her CT scan between cases that day and Luciana was scheduled for surgery the next day.

It is important that people all over Haiti know that this pediatric specialty surgical program is available to children in need. Maguy Rochelin takes this seriously and spreads the word in many ways.  Several months ago she took the opportunity to travel along when her sister went to a hospital in Fond du Blanc. While her sister was conducting her business meeting, Maguy met with the hospital director and staff to explain the program.  “Yes,” they said, “we do see children with hydrocephalus and are glad to know of the service. We will definitely send you patients!” And so it happened that they were able to send the family on to HBMPM when she was diagnosed with hydrocephalus in their clinic – good timing for Luciana. 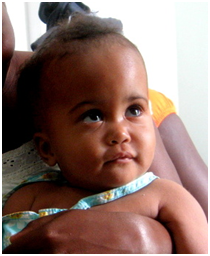 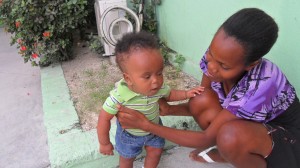 The baby’s name is Isaac Bastien from Les Cayes and he is 7 months old. He had surgery July 14, 2012 by Dr John Grant. Here is his story.

Story by Margareth Rochelin, RN in Haiti (Maguy), as told to her by the mother of the baby.

The first time I saw the baby and his mother it was the last week of June, 2012. The mother was so devastated, she was crying a lot and she kept on saying “He is my first baby, I don’t want to lose him”. I reassured her by saying that a neurosurgeon from the States will soon come to care for the children with the same problem as her baby.

She noticed that the baby’s head was a little bigger when he was one month old. That means that she is a very good mother and she didn’t waste any time. She took the baby to the nearest hospital. They told her that it seems that the baby has “water in his head, and that there wasn’t anything that they could do for her”. She was referred to two other hospitals (the Hospital La Paix and St. Damien Hospital) and was told the same thing. Then she was told to go to Bernard Mevs Project Medishare Hospital in Port Au Prince and ask for Miss Maguy. At that time it was already 6 PM. She went back home.

“The next morning around 6 am I was already on the street with my baby in my arms headed to Bernard Mevs Hospital” said Isaac’s mother.  “As I got there I asked for Miss Maguy. The security guard let me in and showed me where to find her. I was so happy when she told me that that they can help my baby. I was so so happy. Miss Maguy told me that there would be a neurosurgeon at the hospital on July13th.  She took us to the pediatric clinic to be seen by the pediatrician. The doctor ordered blood work and a CT scan for the baby. Miss Maguy put the baby on the list for July.”

“The baby had his surgery on July 14th. To me it’s like a miracle. I am a poor woman and I had no money to pay.  Since then the baby is doing great. He is holding his head straight, he is trying to crawl, he smiles, he plays, he is trying to grasp for things, he stands with help.”

Conclusion : “The Dr saved my baby’s life. I would tell all the mothers with hydrocephalus babies don’t waste any time once they noticed any changes in their babies. Always take them to the nearest hospital. Thank you to all the neurosurgeons from the States who are helping the poor hydrocephalus children of Haiti.” 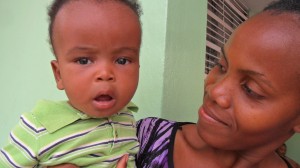