Hydrocephalus is one of the most common treatable causes of neurological disability and death in the developing world.  When identified early and treated effectively, the buildup of fluid in the brain can be prevented, improving the chance for a normal and productive life.  Haiti’s population of over 9 million people has very limited access to neurosurgical care and there is no formal neurosurgical training program in Haiti. 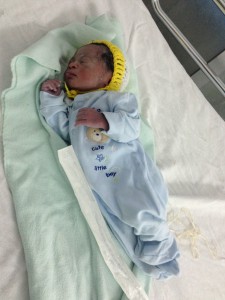 In the early years of the program, children presented at any age with advanced hydrocephalus. As the program has become more widely known in Haiti, infants and children have been referred earlier and surgical intervention has prevented permanent disability or death.

Over the years, the team traveled to various locations to perform the surgeries, initially twice a year. The all volunteer teams of nurses, technicians, doctors and student 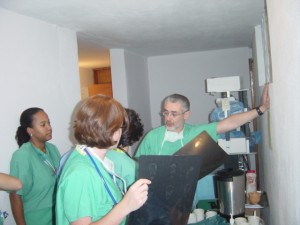 helpers from across the United States,  pay their own way and raise funds to support the program. Currently, surgery is performed at Bernard Mevs Hospital in Port au Prince with the coordinated help of Project Medishare and local Haitian staff.

Our pediatric neurosurgical teams from various pediatric specialty centers across the 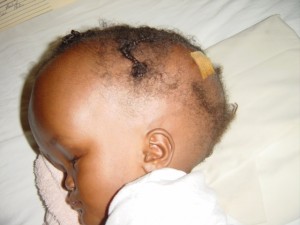 United States come to Haiti at regular intervals to perform surgery for children who need it.  The most common procedure is an ETV (Endoscopic Third Ventriculostomy). In 2003, our team was the first organization to offer the ETV treatment for the children of Haiti. VP Shunts (Ventriculo-peritoneal shunts) are also placed. (Please see the “What is Hydrocephalus” section on this website for further details.) Children with other neurosurgical disorders are assessed in the clinics also.

The Fisherman Project: As the old saying goes “If you give a man a fish, he will eat for a day, but if you teach him to fish, he will eat for a lifetime”. In 2017 we began a formal neurosurgical training program in Haiti with mentorship and teaching provided by a regular presence of United States and European Neurosurgeons. We hired our first neurosurgical Haitian trainee, Dr. Yudy LaFortune. These first trainees will hopefully go on to become the teachers of the future Haitian neurosurgeons in a formal haitian run neurosurgical training program, securing a self sustainable program of care for children with hydrocephalus and other neurosurgical disorders.

Fifty percent of hydrocephalus in under developed countries is caused by an infection, either during pregnancy, during labor or soon after birth. Currently, our physicians are collecting specimens that are being sent to laboratories in the US in the hope of identifying the source of these infections.